Posted on 8 October, 2012 by Azienda Agricola Cantrina in Newsletter

It’s incredible: it seems as though we barely finished the 2011 harvest and here we are already at the end of this odd, totally crazy 2012!!!

Yes, odd, since what else would be the right word to describe a growing year that started off with such a mild, dry winter that there was no snow, not even on the mountains, followed by a rainy, wet spring that created no lack of problems in the vineyards, which were trying to flower, then all of a sudden it was summer, and one of the hottest of recent years to boot? Hot and dry that is, until heavy rains came during the last stage of the growth cycle. So, changing environment, creeping tropicalisation of our climate? Who knows, but our job as winegrowers, and it isn’t an easy one, is to interpret as best we can what nature sends us, and so…

…and so this year too, we were “out of the starting blocks” early, right after mid-August, picking slowly in the vain hope of some relief in the form of a rain or two but then finding that we had just about finished picking the pinot noir and white grapes by the end of August. They came in at 30% less than we expected, but the quality of the fruit was good, particularly of the rosanoire. 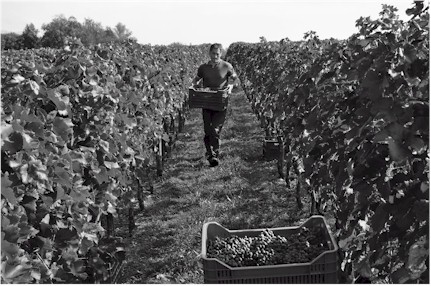 The reds, on the other hand, took full benefit of the abundant rainfall in September, which allowed them to recover almost completely, both in quality and quantity, from the damage the high temperatures had brought. We brought in Merlot Rebo and Marzemino between mid- and late September, leaving just a small amount on the vines in the hope of getting some natural over-ripening. The final balance-sheet: the quantity was pretty much in line with previous years, while the grapes were loaded with colour, sugars, and–very surprisingly–acidity as well, all of which will produce wines with very lengthy cellarability.

We are continuing to make Groppello and next winter we will start re-planting part of the vineyard, replacing the current grape varieties with, yes, Groppello, and we will be modifying the vineyard layout to better match the requirements of this fairly demanding indigenous grape.

In early September, after suitable bottle-ageing, we released the new vintagesof some of the wines: Nepomuceno Esercizio n. 7, Zerdì 2009 and Sole di Dario 2007.

Nepomuceno and Sole di Dario should reprise the exceptional quality of the 2007 vintage, powerful and elegant at the same time, and we are very pleased with Zerdì 2009: Rebo’s usual decisive character is enfolded in a superb balance not always present in past editions.

14 October 2012 Profumi di mosto. We will be open from 11.00am to 6.00pm, so come and taste our wines, paired with traditional local cheeses and cold cuts, offered byCondotta SLOW FOOD GARDA.

21-24 October 2012 HOSP&FOOD at the fair in Brescia. We will be there with our stand. This is a new event, focussing on local products, and on services and equipment for hospitality professionals. Those who want to attend can download and print the invitation here.

1-2 December 2012 MERCATO DEI VINI at Piacenza, by the VIGNAIOLI INDIPENDENTI. Two event-packed days with personal contact with the wine producers, and you can taste then buy the wines right at the fair.

That’s it for now…